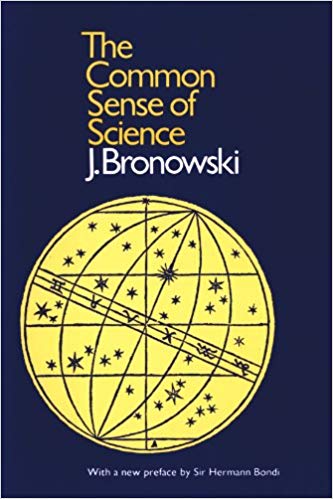 I stumbled on this in a used bookstore. Books about science by scientists are already my thing, and anthropologist Jacob Bronowski already stands out in my mind as a distinguished big-picture popular scientist because I’ve youtubed his The Ascent of Man, a 1980’s BBC series about human natural history that was commissioned by David Attenborough.

The book has its unity, even though its most easily described in terms of its parts: a sketch of the history of Western thought as a history of science. The emphasis he places on human error, accident, and historical contingency help reinforce an overall message that science is a human social endeavor. He succeeds in showing that the things that make it vulnerable and flawed are precisely what make it accessible, and he positions the book as an argument against a popular fear and suspicion of science that emerged in the 20th century.

What struck me in the beginning of the book was how much his account of the rise of science-like thinking mirrored Foucault’s in The Order of Things: for centuries humans understood the signature of order in nature to be similarity (walnuts prescribed for headaches because they look like brains—one of Foucault’s examples) , until intellectual developments in the 17th and 18th centuries reinterpreted similarity as occurring in minds, and not beyond them, and created a new way of ordering things in terms of causes and mechanisms.

And what struck me about the end of the book was how forcefully presents the rare picture of science that I most often fight for myself, as something less about steel-cold logic, and more about a world so complicated as to permit only tinkering, and yield only to luck and experience.

Most times that you hear a scientist resisting a picture of science, they’re pushing back against what they imagine the man-on-the-street thinks: “We’re not out-of-touch eggheads in the ivory tower? We matter!”. But there is a picture of science that I wrench as often out of the heads of scientists as any other type of person. It’s the idea that the goal of science is to find the logical system that explains everything. It’s an attractive picture because it has an end, and also because, at moments in the past, it hasn’t seemed so far off. Newton found a system that explains both billiard balls and the solar system. 20th century biologists of the modern evolutionary synthesis connected genetics to evolution to, eventually, cellular biology. But for most sciences, especially the natural and social sciences, well, there might be a system, but its going to be beyond the ability of the human mind to encapsulate. In such an environment, you have to step back from finding the system that explains everything, to finding a system that explains as much as it can without getting too complicated. In this picture, a big constraint on theory building is the human capacity to understand theories. It’s a special view of science because it’s harshly critical of many of the archetypes that we usually see as unimpeachable core scientists. Those great minds that imposed mathematical rigor on human behavior, and were so dazzled by it that they dismissed evidence when it threatened to haze the luster.

The sweep and finality of his system, which like the Goddess of Wisdom seemed to his contemporaries to step fully formed from a single brain was a visible example. From a puzzle of loose observations and working rules he had produced a single system ordered only by mathematics and a few axioms: ordered, it seemed, by a single divine edict, the law of inverse squares. Here was the traditional problem of the trader nations since Bible times; its solution meant something to every educated man. And its solution was so remarkably simple: everyone could grasp the law of inverse squares. From the moments that it was seen that this lightning flash of clarity was sufficient—God said “Let Newton be” and there was light—from this moment it was felt that here plainly was the order of God. And plainly therefore the mathematical method was the method of nature.
…
A science which orders its thoughts too early is stifled. For example, the ideas of the Epicureans about atoms two thousand years ago were quite reasonable; but they did only harm to a physics which could not yet measure temperature and pressure and learn the simpler laws which relate them. Or again the hope of the medieval alchemists that the elements might be changed was not as fanciful as we once thought. But it was merely damaging to a chemistry which did not yet understand the compositions of water and common salt.

The ambitions of the 18th century systematizers was to impose a mathematical finality on history and biology and geology and mining and spinning. It was a mistaken ambition and very damaging. (p44–45)

I’m especially happy about his digs at economics.

There is no sense at all in which science can be called a mere description of facts. It is in no sense, as humanists sometimes pretend, a neutral record of what happens in an endless mechanical encyclopedia. This mistaken view goes back to the eighteenth century. It pictures scientists as utilitarians still crying “Let be!” and still believing that the world runs best with no other regulating principles natural gravitation and human self-interest.