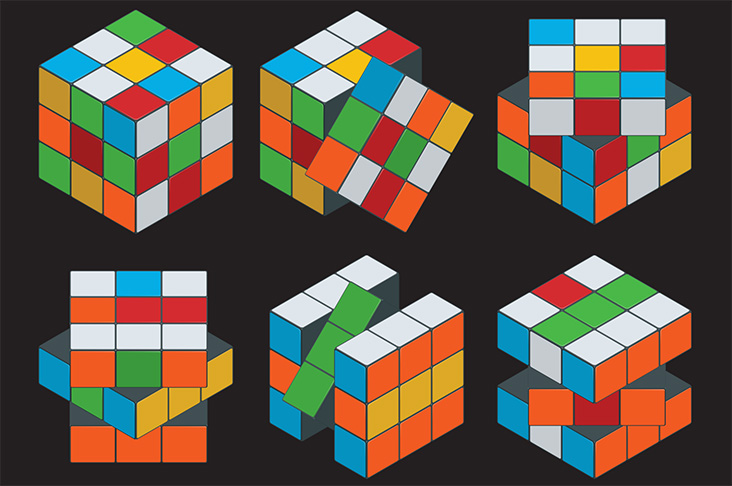 Looking at today’s Internet, it is easy to wonder: whatever happened to the dream that it would be good for democracy? Well, looking past the scandals of big social media and scary plays of autocracy’s hackers, I think there’s still room for hope. The web remains full of small experiments in self-governance. It’s still happening, quietly maybe, but at such a tremendous scale that we have a chance, not only to revive the founding dream of the web, but to bring modern scientific methods to basic millenia-old questions about self-governance, and how it works.

That’s why I spent five years studying Minecraft. Minecraft, the game you or your kid or niece played anytime between 5 minutes and 10 years ago, consists of joining one of millions of boundless virtual worlds, and building things out of cubic blocks. Minecraft doesn’t have a plot, but narrative abhors a vacuum, so people used the basic mechanics of the game to create their own plots, and in the process catapulted it into its current status as the best-selling video game of all time. Bigger than Tetris.

Minecraft’s players and their creations have been the most visible facet of the game, but they are supported by a class of amateur functionaries that have made Minecraft special for a very different reason. These are the “ops” and administrators, the people who do the thankless work of running each copy of Minecraft’s world so that it works well enough that the creators can create.

Minecraft, it turns out, is special not just for its open-ended gameplay, but because it is “self-hosted”: when you play on a world with other people, there is a good chance that it is being maintained not by a big company like Microsoft, but by an amateur, a player, who somehow roped themselves in to all kinds of uncool, non-cubic work writing rules, resolving conflicts, fixing problems, and herding cats. We’re used to leaving critical challenges to professionals and, indeed, most web services you use are administered by people who specialize in providing CPU, RAM, and bandwidth publicly. But there is a whole underworld of amateur-run server communities, in which people with no governance training, and no salary, who would presumably prefer to be doing something else, take on the challenge of building and maintaining a community of people who share a common vision, and work together toward it. When that works, it doesn’t matter if that vision is a block-by-block replica of the starship Enterprise, it’s inspiring. These people have no training in governance, they are teaching themselves to build governance institutions. Each world they create is a political experiment. By my count, 19 of 20 fail, and each success and failure is a miraculous data point in the quest to make self-governance a science.

That’s the dream of the Internet in action, especially if we can bring that success rate up from 1/20, 5 percent. To really understand the determinants of healthy institutions, we’d have to be able to watch 100,000s of the nations of Earth rise and fall. Too bad Earth only has a few hundred nations. Online communities are the next best thing: they give us the scale to run huge comparisons, and even experiments. And there is more to governing them than meets the eye.

Any system that manages to thrive in these conditions, despite being available to the entire spectrum of humanity, from anonymous adolescents with poor impulse control to teams of professional hackers, is doing something special. Public web servers are “commons” by default. Each additional user or player who joins your little world imposes a load on it. Even if all of your users are well intentioned your server will grind to a halt if too many are doing too much, and your community will suffer. When a valuable finite resource is available to all, we call it a common pool resource, and we keep our eyes out for the classic Tragedy of the Commons: the problem of too many people taking too much until everyone has nothing.

The coincidence of the Information Age with the global dominance of market exchange is that virtually every application of advancing technology has been toward making commons extinct. Anything that makes a gadget smaller or cheaper makes it easier to privately own, and more legible to systems that understand goods as things that you own and buy and sell. This goes back all the way to barbed wire, which turned The Wild West from the gigantic pasture commons that created cowboys to one that could feasibly to fence off large tracts of previously wild land, and permit the idea of private property. (Cowboys were common pool resource managers who ranged the West bringing cow herds back to their owners, through round-ups.). Private servers like those in Minecraft are a counterpoint to this narrative. With modern technology’s adversity to the commons, it’s funny every time you stumble on a commons that was created by technology. It’s like they won’t go away.

That brings up a big question. Will commons go away? Can they be privatized and technologized away? This is one foundation of the libertarian ideology behind cryptocurrency. But the stakes are higher than the latest fad.

One claim that has been made by virtually every philosopher of democracy is that successful self-governance depends not only on having good rules in place, but on having members who hold key norms and values. Democracy has several well-known weak spots, and norms and values are its only reliable protection from demagogues, autocrats, elites, or mob rule. This sensitivity to culture puts institutions like democracy in contrast with institutions like markets, hierarchies, and autocracies, whose reliance on base carrots and sticks makes them more independent of value systems. Economist Sam Bowles distinguishes between Machiavellian and Aristotelian institutions, those that are robust to the worst citizen, and those that create good ones. The cynical versus the culture-driven institutions.

The same things that make cynical institutions cynical make them easy to analyze, design, and engineer. We have become good at building them, and they have assumed their place at the top of the world order. Is it their rightful place? In the tradition that trained me, only culture-driven institutions are up to the challenge of managing commons. If technology cannot take the commons from our our future, we need to be as good at engineering culture-driven institutions as we are at engineering markets and chains of command. Minecraft seems like just a game, a kid’s game, but behind its success are the tensions that are defining the role of democracy in the 21st century.

Unfortunately, the same factors that make cynical institutions easy to build and study make culture-driven institutions hard. It is possible to make thousands of copies of a hierarchy and test its variations: that’s what a franchise is: Starbucks, McDonalds, copy, paste. By contrast, each inspiring participatory community you discover in your life is a unique snowflake whose essence is impossible to replicate, for better and worse.

By researching self-organizing communities on the Internet, wherever they occur, we take advantage of a historic opportunity to put the “science” in “political science” to an extent that was once unimaginable. When you watch one or ten people try to play God, you are practicing history. When you watch a million, you are practicing statistics. We can watch millions of people trying to build their own little Utopia, watch them succeed and fail, distinguish bad choices from bad luck, determine when a bad idea in most contexts will be good somewhere else, and build general theories of institutional effectiveness.

There are several features that make online communities ideal for the study of culture-driven institutions. Their low barrier to entry means that there are many more of them. Amateur servers are also more transparent, their smaller scale makes them simpler, their shorter, digitally recorded histories permit insights into the processes of institutional change, and the fact that they serve identical copies of known software makes it possible to perform apples-to-apples comparisons that make comparisons of the Nations of Earth look apples-to-elephants by comparison.

A study of the emergence of formal governance

Big ideas are nice, but you’ve got to pin it down somehow. I began my research asking a more narrow question: how and why do communities develop their governance systems in the direction of increasing integration and formalization. This is the question of where states come from, and bureaucracy, and rules. Do we need rules. Is there a right way to use them to govern? Is it different for large and small populations? To answer this, I wrote a program that scanned the Internet every couple of hours for two years, visiting communities for information about how they are run, who visits them, and how regularly those visitors return. I defined community success as the emergence of a core group, the number of players who return to a specific server at least once a week for a month, despite the thousands of other communities they could have visited. And because the typical lifespan of a server is nine weeks, it was possible to observe thousands of communities, over 150,000, over their entire life histories. Each starts from essentially the same initial conditions, a paradoxical “tyrano-anarchy” with one ruler and no rules. And each evolves in accordance with a sovereign administrators naïve sense of what brings people together. As they develop that sense, administrators can install bits of software that implement dimensions of governance, including private property rights, peer monitoring, social hierarchy, trade, communication, and many others. Most fail, some succeed.

According to my analysis, large communities seem to be the most successful the more actively they attend to the full range of resource management challenges, and, interestingly, the more they empower the sole administrator. Leadership is a valuable part of successful community, especially as communities grow. The story becomes much harder to align with a favorite ideology when we turn our focus to small communities. It turns out that if your goal is to run a community of 4, rather than 400 regular users, there is no governance style that is clearly more effective than any other: be a despot, be a socialist, use consensus or dice, with few enough people involved, arrangements that seem impossible can be made to work just fine.

What this project shows is that rigorous comparisons of very large, well-documented populations of political experiments make it possible to understand the predictors of governance success. This is important for the future of participatory, empowering governance institutions. Until effective community building can be reduced to a formula, effective communities will be rare, and we humans will continue to fail to tap the full potential of the Internet to make culture-driven institutions scalable, replicable, viable competitors to the cynical institutions that dominate our interactions.

With more bad news every day about assaults on our privacy and manipulation of our opinions, it is hard to be optimistic about the Internet, and what it will contribute to the health of our institutions. But, working diligently in the background, is a whole generation of youth who have been training themselves to design and lead successful communities. Their sense of what brings people together doesn’t come from a charismatic’s speechifying, but their own past failures to bring loved ones together. They can identify the warning signs of a nascent autocrat, not because they read about autocracies past, but because they have personally experienced the temptation of absolute power over a little virtual kingdom. And as scientist learn these lessons vicariously, at scale, self-governance online promises not only to breed more savvy defenders of democracy, but to inform the design and growth of healthy, informed participatory cultures in the real world.