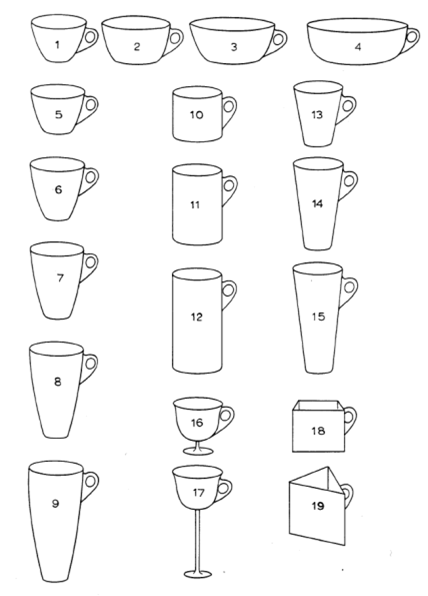 There are mostly useless of bits of cognitive psychology that I’ve always loved. For example, a lot of categorization research about life on the edge of what objects are what. How flat can a bowl be before it’s a plate? How narrow can a mug be before it’s a cup? How big can a cup be before it’s a bowl? Can it have a handle and not be a cup? When does too much handle make it a spoon? These are questions that can be used to create little microcosms for the study of things like culture, learning, expectations, and all kinds of complexities around the kinds of traits we’re surprisingly sensitive to.

Again, I haven’t found much of it very useful, until recently, trying to order my coffee just the way I like it, I’ve encountered all kinds of unexpected roadblocks. The problem is that my drink doesn’t have a name, and is very close to several drinks that do, each of which comes with it’s own traits and customs and baggage. As a result, I’ve learned that when I’m not careful my drink gets sucked up semantically into the space of its bossy neighbors. The way I like my coffee is close-ish to ways coffee is already commonly served, but different in some important ways that can be very tough to get into a kindly, but overworked barrista’s busy head. Being in a non-category, close to existing ones, means that the meaning of my order has to avoid the semantic basin of other more familiar drinks in endlessly surprising and confounding ways.

So,
“Double shot of espresso with water and heavy cream in a roughly 4 to 3 to 2 ratio”
fails on both concise and sparing me from being that guy. Fortunately there are a lot of ways of asking for what I want. Fascinatingly, they all fail in interesting ways:

“Give me a double Americano with less water and heavy cream”
The major nearest neighbor to what I want is the Americano. So it makes sense to use that as a shortcut, by giving directions to my drink from the Americano landmark. Seems straightforward, but Americano, it turns out, is a bossy category, and asking for it asks for a surprising lot of its unexpected baggage as well. Mainly the amount of water. In the US at least, the ratio of coffee to water is often 10:1. Just asking for “less” tends to get me 5:1 or 8:1, meaning there is still several times more water than coffee. No matter how I ask there’s always at least twice as much.

Another bit of the Americano’s baggage is that it’s pretty commonly taken with half and half, meaning that even when I ask for heavy cream, it’s very common for me to end up with half and half, probably due to muscle memory alone. And you can’t ask for “cream,” you have to ask for “heavy cream,” or you’ll almost always get half-and-half.

“Give me a short double Americano with heavy cream”
This should work and it just doesn’t. Something about the word Americano coming out of my mouth means that I’ll get 2 or 5 or 10 times more water than coffee, no matter how I ask.

And all of these problems get worse depending who got the order. Your chances are actually OK if you’re talking to the person who will make the drink. But if you’re talking to a cashier who will then communicate, verbally, in writing, or through a computer, to the person who makes your drink, then the regularizing function of language almost guarantees that your drink will be passed on as a normal Americano. The lossy game of telephone loves a good semantic attractor.

“Give me a double Americano with heavy cream in an 8oz cup”
They’ll usually still add too much water, and just not have room for more than a drop or two of cream. This order also gets dangerously close to making me that guy.

“Give me a double espresso with hot water and heavy cream”
With all the Americano trouble I eventually learned to back further away from the Americano basin and closer to my drink’s even bigger, but somehow less assumption laden neighbor, Espresso. Somehow, with this order and the refinement below I end up with what I wanted more often than not. I wish I could say that this obviously works better. It works better, but it’s still not obvious. And it still goes wrong regularly, and still occasionally in strange and new ways. The most impressive is when the barrista mentally translates “espresso with water” to “americano,” pulling me fully back into the first basin, and back into all of the traps above. Less commmonly they’ll mentally translate “espresso with cream” into macchiato or breve and steam the cream. This means that some categories are distorting my drink even when I’m in neighboring categories. They have that much gravity.

“Give me a double espresso with hot water and heavy cream; not an Americano, just a bit of water”
Fails on concision, and definitely makes me that guy.

“Give me equal parts espresso (a double), hot water, and heavy cream”
I came up with this to get out of the Americano trap elegantly, and it works pretty well. It shouldn’t because I actually like a bit less cream than water, and less of both than coffee (4:3:2, not 4:4:4), but the strength of the Americano attractor ends up working in my favor: the temptation to add less cream than anything means that they’ll tend to subconsciously ignore me and put the right amount of cream. But they’re also likely to still put more water than coffee. And another common failure occurs when I actually get taken literally and get equal proportions. That results in way too much cream, and I can’t complain because it’s literally what I asked for. It’s one of the more confounding failures because I can only blame myself.

“Give me a double espresso with equal parts hot water and heavy cream”
A little variation on the above, that also depends on the subconscious strength of the Americano trap. Less concise, but overall more effective.
Again, I really want 4:3:2, not 1:1:1, but it’s happened before that a subconscious understanding leads a barista to give me more water than cream. The most common failure, again, is when I’m taken literally and get equal proportions (too much) cream. The most hilarious failure was a barrista who listened perfectly but Also fell into the Americano trap (“espresso + water = Americano”). I ended up with 2 parts espresso, 10 parts water, and 10 parts heavy cream. You literally couldn’t taste any coffee. Who would even do that? It was like drinking watery melted butter. Totally absurd. I was too impressed to be annoyed.

“Italiano with heavy cream”
This really would be the winner, certainly on concision, except nobody knows what an Italiano is. It’s an espresso with a tiny amount of water added—perfect—so in humans with this category in their head it’s perfect, because the work has already been done carving these traits out of the Americano basin. The problem is universality: this fine category only exists in a small subset of heads. Somehow it’s the rare barrista that’s heard of an Italiano. What I could do is ask for it, and if they don’t know what it is, explain it. Something new having a word is more powerful at overcoming the Americano trap than something new not having its own word. But you really can’t get more “That Guy” than explaining to barristas obscure coffee drinks.

“Give me a cafe con panna with a bit of hot water”
Literally, this is just what I want, panna=cream, but in practice panna is understood as whipped cream and there’s not a concise way to specify liquid.

“Espresso with heavy cream”
If you just don’t mention water at all, a lot of confusion disappears. I don’t get what I want but it’s close and concise and easy and universal. Except, I should have mentioned this sooner, a lot of places don’t even have heavy cream, just half and half. Totally different thing.

“Espresso with heavy cream … … Oh! Also, could you add a bit of hot water?”
Affected afterthought aside, this works pretty water. Asking for water after cream is a good signal to not add very much. But it’s kind of a pain for everyone, and this only works at a place once before it starts coming off as inauthentic. You can’t ask the cashier, you have to ask the person making the drink, or it’ll get lost in translation and you’ll get an Americano.

“I’d like a coffee please”
This really fails on being what I want, but succeeds on so many other dimensions that, well, sometimes I’ll just give up and do this.

OK, what was this pointless madness? Here’s the idea. Think of every drink as a point on the axes of coffee, water, cream, milk, half-and-half, foam, sugar, whatever. Now carve up that space. Americano gets a big space. What happens if you’re in it is that your coordinates get distorted, maybe toward the middle, of whatever space you’re in. Not just that, but points near the boundary, but outside of it, get sucked in. Something about human meaning makes it so that the act of carving a state space into a semantic regions distorts it and moves it around. By understanding these processes, and how they work, how to correct for them or even exploit them, we not only get bettter at meaning and its games, but, in the case of a nameless, obscure, specific and disregarded form of coffee, get what we want despite everything.